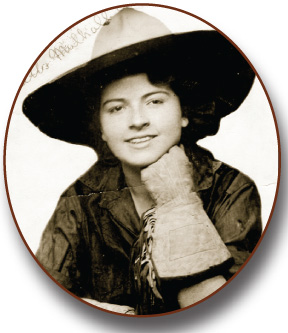 This photograph of cowgirl Goldie Griffith was taken for promotion of the show she traveled with in 1914. As part of Lucille Mulhall’s Girl Rangers, Goldie traveled with Lucille, Lucille’s brother, and Lucille’s father around Canada and the U.S.

Lucille Mulhall was America’s first cowgirl—President Teddy Roosevelt suggested to Lucille’s father that he promote his young daughter as a “cow-girl,” and the name stuck. Lucille was one of the few women who roped steers, competing with the men, and often beating them. She was as famous as today’s rock stars. She often left the Wild West and rodeo circuit to star in vaudeville shows, and she eventually started her own show. When the vaudeville circuit wasn’t paying enough money, Lucille left the show for a while, and Goldie took her place, riding a bucking bronco on stage.