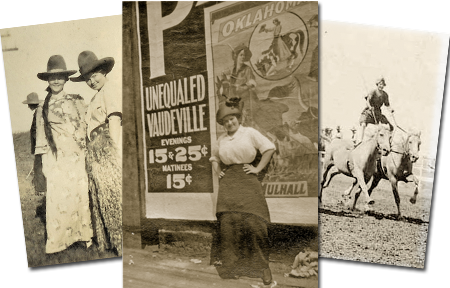 Goldie posed in woolly chaps for a photo with a Mrs. Johnson when she was touring with the Lucille Mulhall Girl Rangers. Cowgirls were often invited to society events when their Wild West shows came to town, and city women wanted to have their pictures taken with the famous athletes.

While touring with the Lucille Mulhall Girl Rangers, Goldie posed outside the Pantages Theater in Tacoma, Washington. The Wild West shows that Goldie toured with usually performed every day. They often took down the show, traveled overnight, and set up again the next morning. The performers then rode in a parade, and often did two shows before taking down the show again. The schedule was grueling, and Goldie said it was a small relief to play a couple nights in a row with the Girl Rangers.