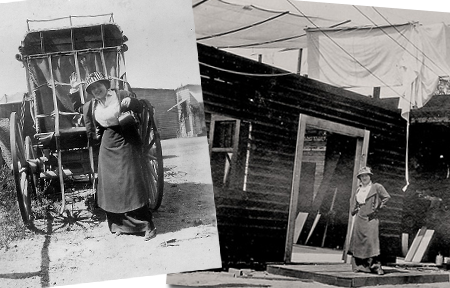 Tom Mix was Hollywood’s first Western megastar in his big white hat and fancy outfits. With his horse Tony, Mix’s films were action-packed, and Mix usually did his own stunts. Millions of American children grew up watching Tom Mix movies on Saturday afternoons.

Olive Stokes Mix, with Eric Heath, writes in The Fabulous Tom Mix, “Production activities were carried on at a special studio lot covering twelve acres of ground near Edendale, California. This home of Tom’s Fox pictures was appropriately called Mixville. Tom was undisputed ‘King of Mixville,’ just as he was the king of the screen cowboys.

“With Fox he reached the apex of his screen career… Productions became more elaborate, although nothing was sacrificed to action. He knew that his fans wanted action above everything else–and that’s what he gave them. Every new picture came out with new stunts, each more dangerous than previous ones.

“Many of the interior scenes were made at Mixville. Almost everything pertaining to the Old West could be found tucked away somewhere in this unique little settlement; indeed, the vast lot was a miniature West in itself. There was a complete frontier town, with a dusty street, hitching rails, a saloon, Jail, bank, doctor’s office, surveyor’s office, and the simple frame houses typical of the early Western era. Only the signs on the buildings were changed from picture to picture, and some rearrangement of the furnishings.

“There was an Indian village with several lodges nestled in a flat piece of land at the rear of the lot. From the range of plaster-of-Paris mountains surrounding the village Tom led many a convincing attack on a tribe of warriors, the whole thing looking ferociously real when the picture reached the screen.

“There was a plot of simulated desert too, through which Tom and Tony wandered on many an occasion on their search for the ‘bad man’; for although Tom preferred actual locations, the Fox executives always held the budget over his head.

“Among other things at Maxwells there were a ranch house, sans any ceiling of course, a corral that would hold a hundred horses, and a great barnlike structure to hold props, such as saddles, uniforms, guns, and various items of furniture that conformed to the Old West tradition.”